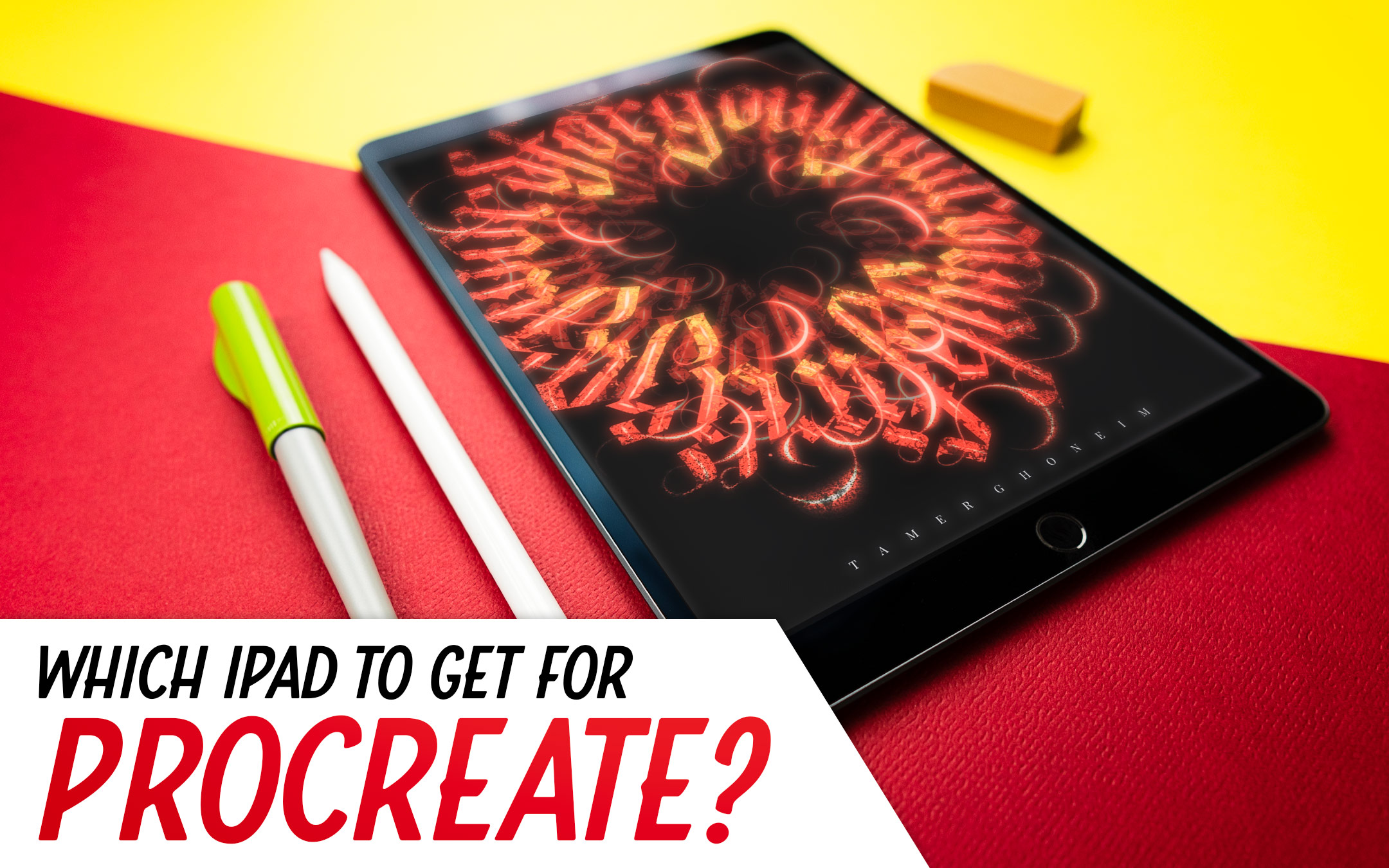 There are so many different models of iPads these days that it can be really hard to decide which model to get.

In this post, I’ll help you figure out which model to get for use with the awesomely fun app Procreate!

Here are the steps and sections we’ll go over in this tutorial:

1. The Quick & Easy (But Expensive) Answer

3. Which iPad Specs are Important?

5. What Difference Does RAM Actually Make?

How Many Layers Do I Actually Need?

1. The Quick & Easy (But Expensive) Answer

If you can afford it, then the answer to this is pretty easy. Get this one. The newest maxed out 2020 iPad Pro with 1 Terabyte of memory (If you don’t need 1TB of memory, there are also 512GB, 256GB, and 128GB versions of this model). You’ll also want the 2nd Generation Apple Pencil to go along with your iPowerhouse tablet (note that the cheaper, 1st Generation Apple Pencil is not compatible with this model).

Although expensive, this option will get you the best of the best currently available.

If, however, you find it hard to justify spending $1,499 (1TB Model) + $129 (Apple Pencil) = a whopping $1,628 (before sales tax and any accessories) on a tablet computer and stylus device, then stick around for a more nuanced evaluation below. 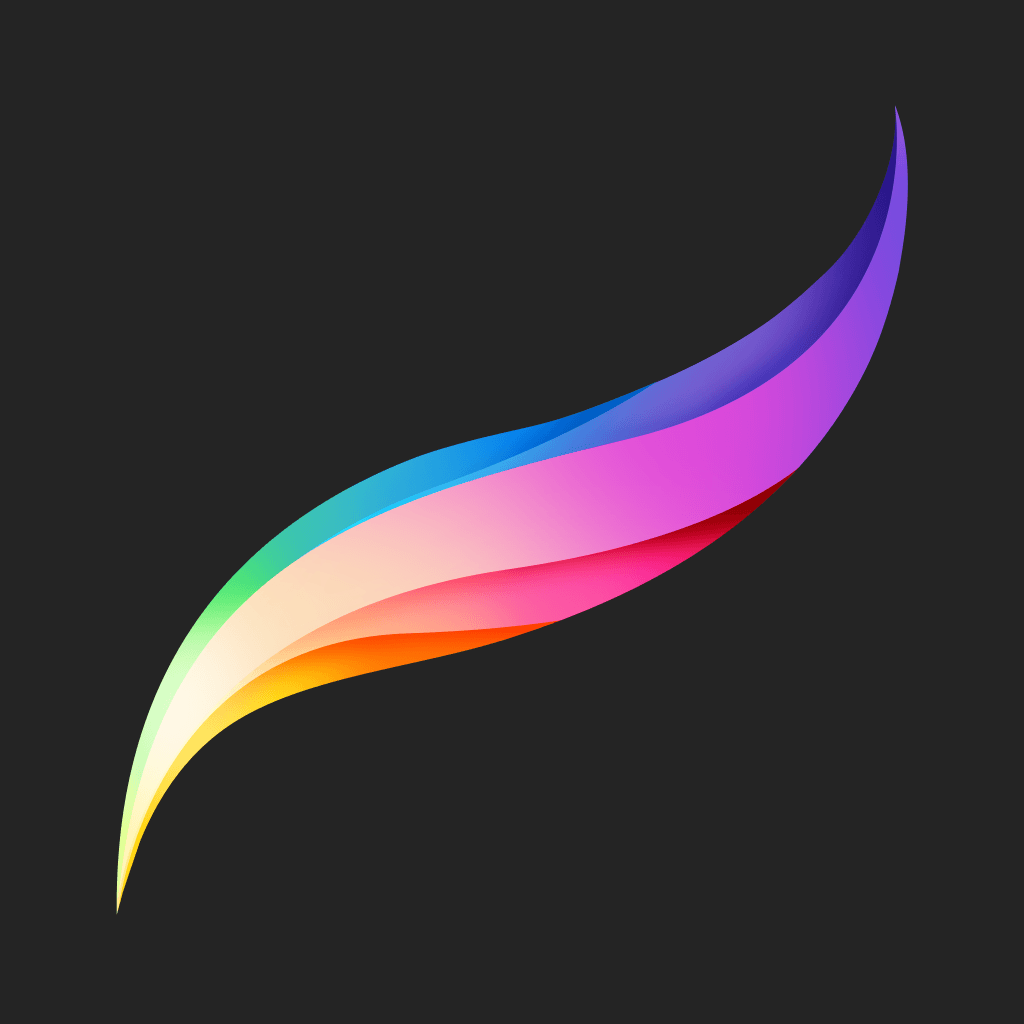 The first thing to confirm is which iPad models Procreate is compatible with.

Straight from the source, the latest version of Procreate (Version 5) is compatible with the following models (links to currently available models are provided):

3. Which Specs are Important? 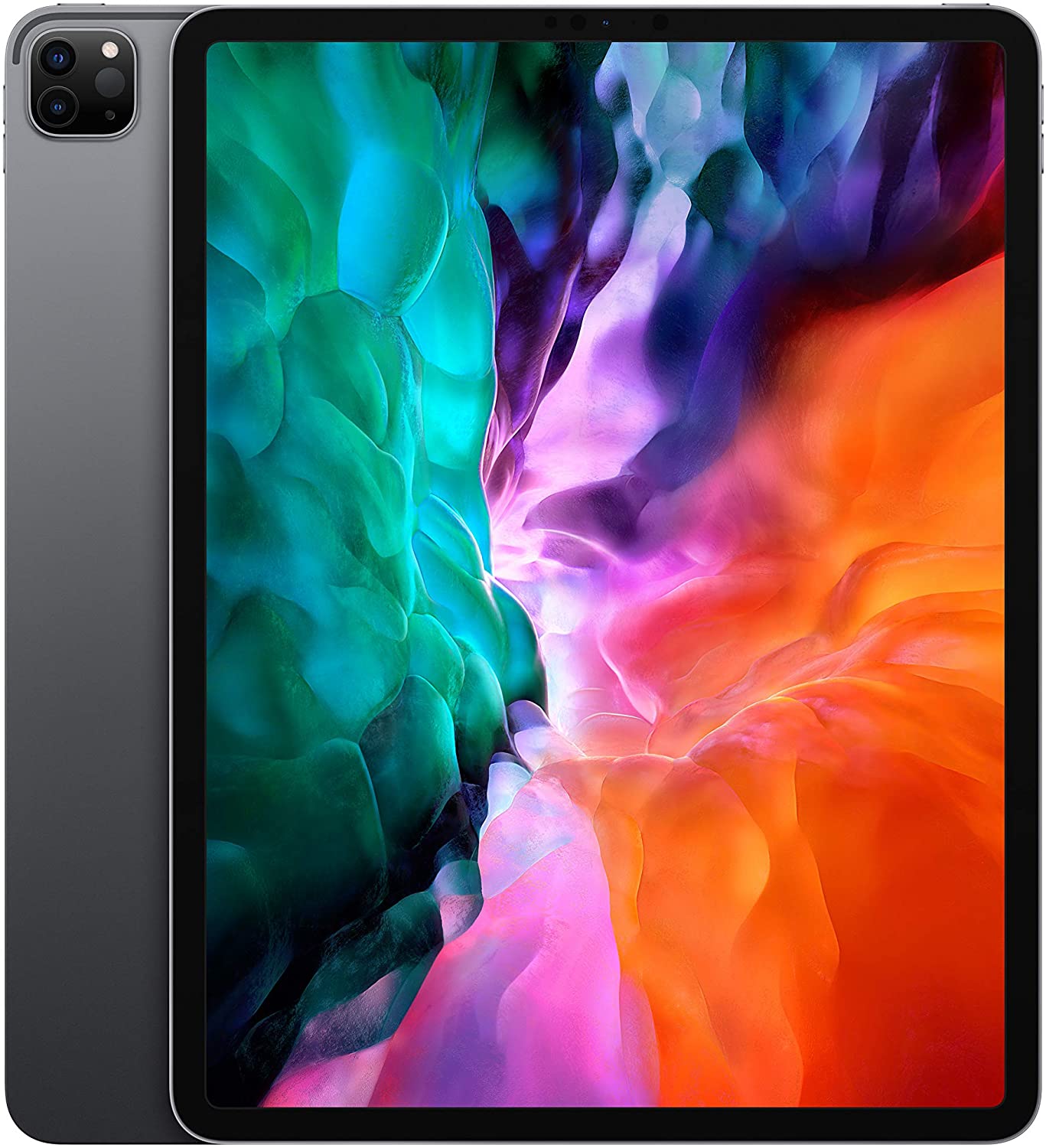 Now that we know which iPad models will run the latest version of Procreate, let’s consider which device specs are important for our evaluation:

Here are some examples showing how to interpret these Chip model numbers:

Without getting into the technical nuts and bolts about what RAM (Random Access Memory) is, the bottom line here is the more is better. So, the higher the number the better (i.e. 4GB of RAM is better than 3GB).

The interesting thing about iPads and RAM is that Apple technically doesn’t publish this spec. Luckily, I’ve done the research for you 😊.

With Procreate specifically, the importance of RAM is that, for any given canvas size (like a 2,000px x 2,000px square canvas), the more RAM you have, the more layers that you can use.

Like RAM, this one is actually pretty easy. The more you have the better, BUT (and this is an important but) Capacity does not influence the performance of your device* (one exception noted at the end of this section), it influences how much “stuff” you can have on your device.

With a higher Capacity, you can install more apps, store more photos, videos, Procreate drawings, books, etc. on the device without running out of space.

How much Capacity do you need? This will honestly depend on your individual usage.

If you mostly use your iPad to surf the internet, check email. and don’t store much on it, you may be ok using a lower Capacity like 64GB (I personally wouldn’t recommend going as low as 32GB, if you can avoid it).

To give you an idea of how much extra space you get at the various capacity sizes, I created the comparison below. Each block represents 32 GB of memory capacity. Each row represents capacity sizes offered in various iPad models.

If you’re like me and use your iPad for business and like to have access to as much stuff as possible without worrying about space, I think the sweet spot tends to be in the 128GB / 256GB / 512GB range. The iPad Pro that I currently own has 512GB of space.

If you want the absolutely maximum capacity possible, 1TB offers lots of storage space but comes at a high cost premium.

This discussion could get extremely technical and confusing very fast so I’m going to do my best to boil this down to a few relevant points.

Put very simply, the displays on all of the devices described in this post are great.

There are differences, but I believe you really only notice them if you closely compared the screens on 2 different devices side by side. Unless you’re a professional photographer or artist who shares their work and needs very reliable color reproduction, the differences aren’t important as the marketing may make it seem.

If you’d like to understand the differences more comprehensively, let me know and I can post an update, but, for simplicity’s sake I’ve ranked the display descriptions below.

The table below summarizes the key specs for the iPad models mentioned in Section 1 of this article.

Remember, as we discussed in the last section, the key specifications to compare are:

5. How Much of a Difference Does RAM Actually Make?

When I confirmed that RAM was the primary spec that impacted how many canases you could use in a Procreate drawing, I was curious to identify what difference the amount of RAM would actually make.

From an official moderator in the Procreate forums:

“…it’s RAM that determines the maximum layer count for a given canvas size. Meaning that getting the same iPad model with a higher storage capacity won’t make a difference.”

Since I have access to a few different iPad models that I’ve owned over the years, I thought I run a few comparison tests (is it wrong that I was actually excited to collect data and make some graphs?)

For all of the iPads that I had access to, I created canvases of increasingly large size (resolution) in Procreate until the program returned an error that that canvas was too large.

I used 2 different iPads, each with 1GB of ram (the orange line (and blue line which overlaps exactly with the orange), an iPad Air 2 with 3GB of Ram (the grey line), and an iPad Pro with 4GB of ram (the yellow line).

The chart below shows the results for canvases up to around 70MP. 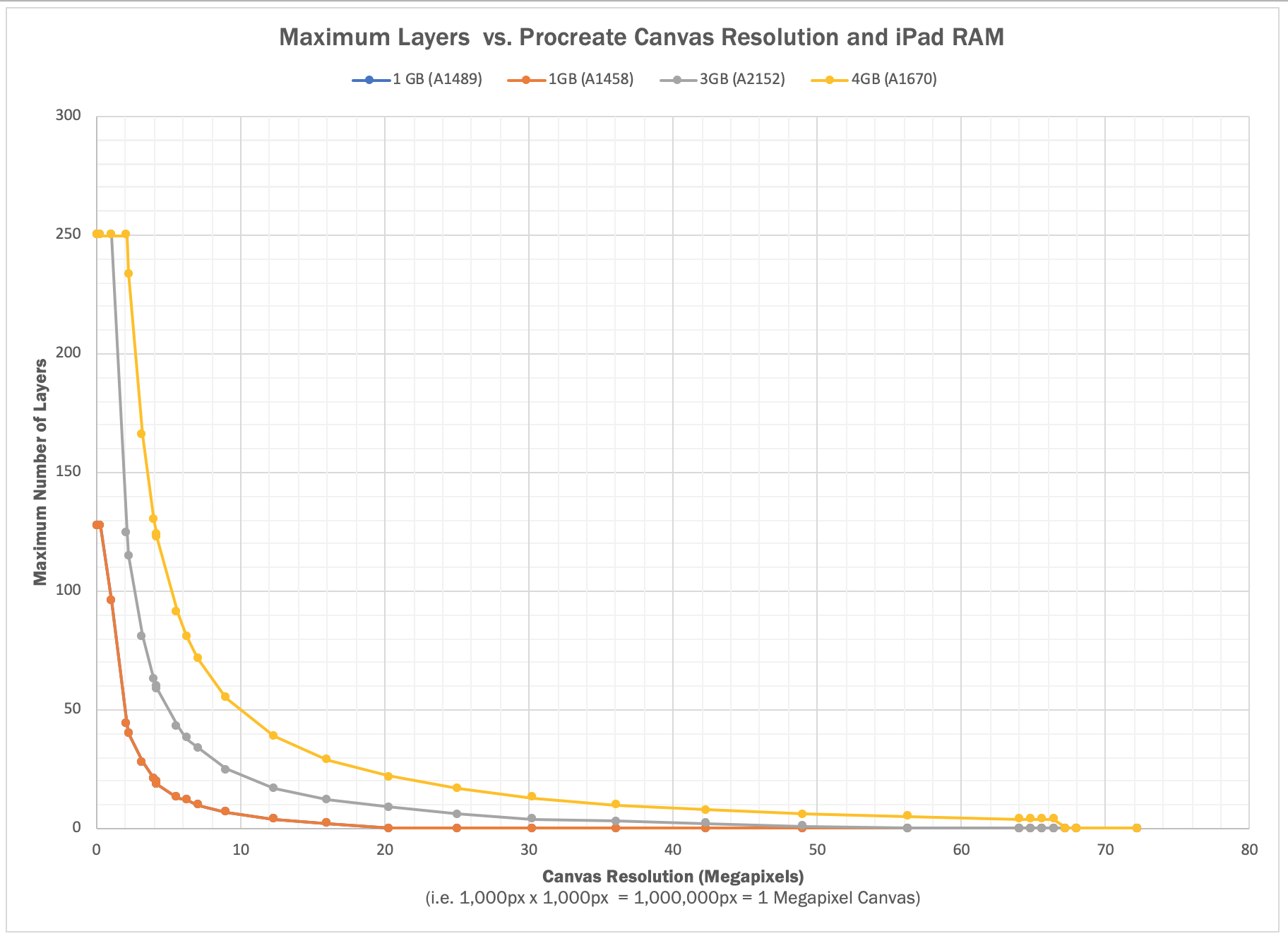 The charge below is zoomed in for canvases up to 25MP. 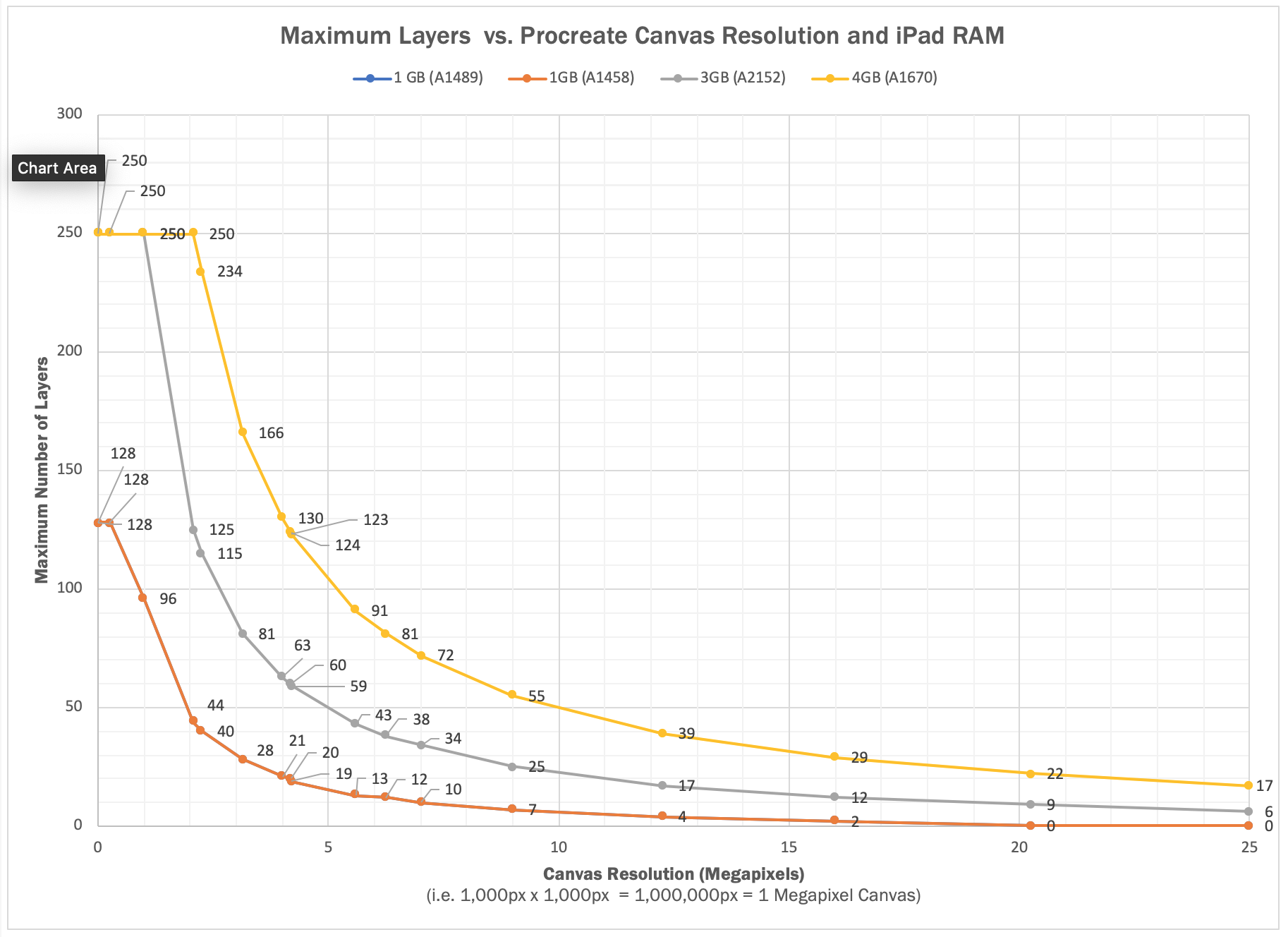 The charge below is zoomed in for canvases up to 15MP. 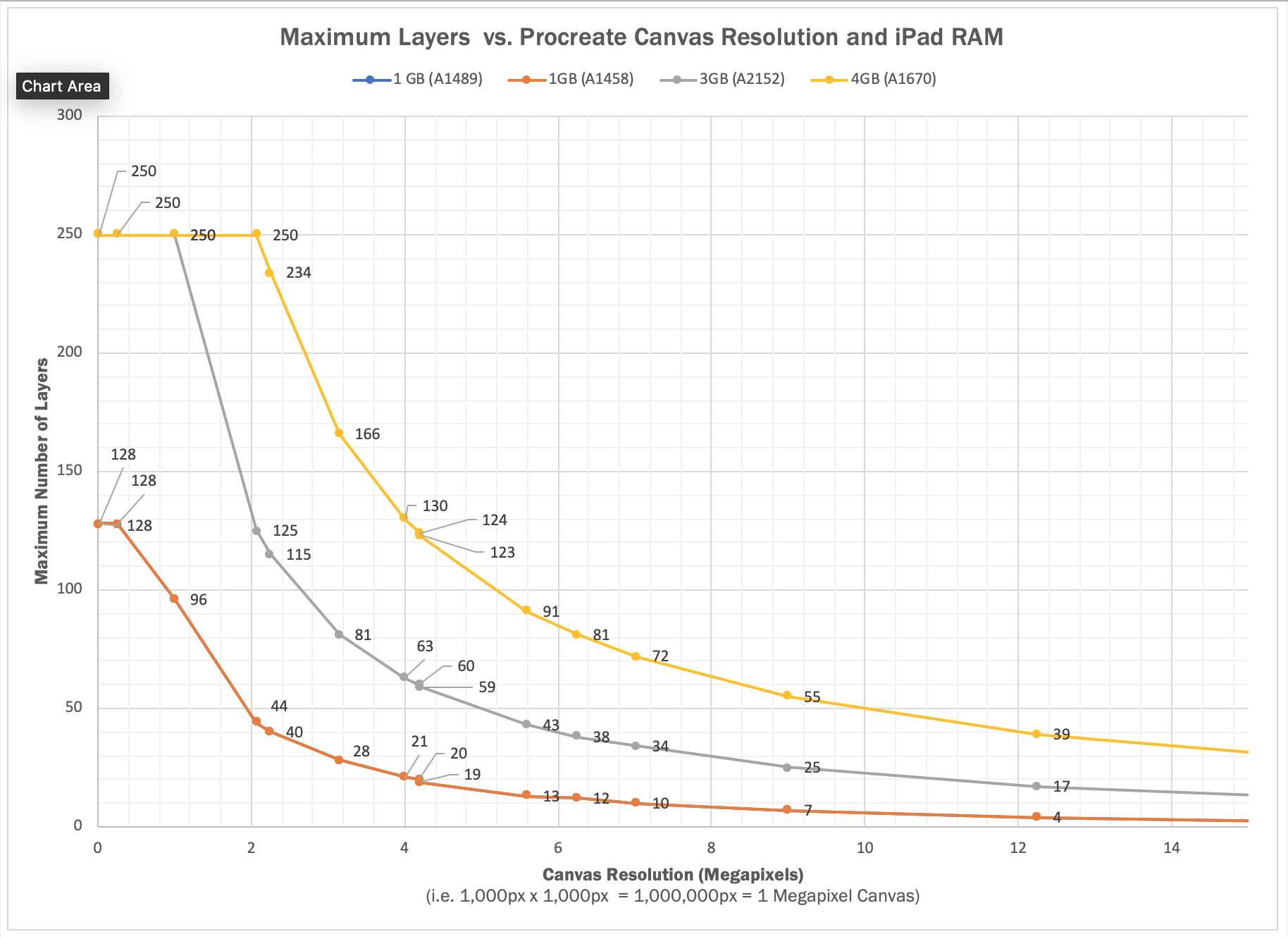 The best way to explain this is with a few examples.

The table below shows a comparison of how many layers can be used for 3 different canvas resolution on devices with 3 different RAM configurations.

The three canvas sizes compared are:

The three RAM amounts compared are from the charts in the last section:

Summarizing one of the examples above, if I wanted to draw on a 3,000 pixel by 3,000 pixel square canvas (a fairly high resolution, but not unreasonable) in Procreate, I have a maximum of:

How Many Layers Do I Actually Need?

How many layers can you expect to actually use? That depends on your individual process and how much flexibility you want to modify and make changes to your art.

The more you separate your work into different layers, the more easily you can alter individual parts.

Although I don’t honestly go back and modify my art often, I do tend to like to preserve more layers in case I do want to make changes at some time or in another application (like Photoshop).

As a reference, I went through many of my Procreate artworks and, of all of them, the highest layer count I’ve used so far is 52 layers.

One factor that could significantly increase the number of layers you need is whether you use Procreate’s animation features.

Recent versions of Procreate have included support for creating animations in the app. Each layer becomes and animation cells so if you have an interest in usign this functionaly, you should consider an iPad with as much RAM as possible.

I’ve provided recommendations below of the iPad models that I would personally recommend for anyone interested in working with Procreate.

These are the models that I didn’t recommend and why:

The following recommendations are purely my opinion.

Based on the models currently available at the time I wrote this post and the research I’ve included, these are the models that I would spend my money on if I was purchasing an iPad today.

As of Nov. 2020, it’s much easier to recommend the new iPad Air as my top choice due all of the upgraded specs including the new processor, RAM, and display. 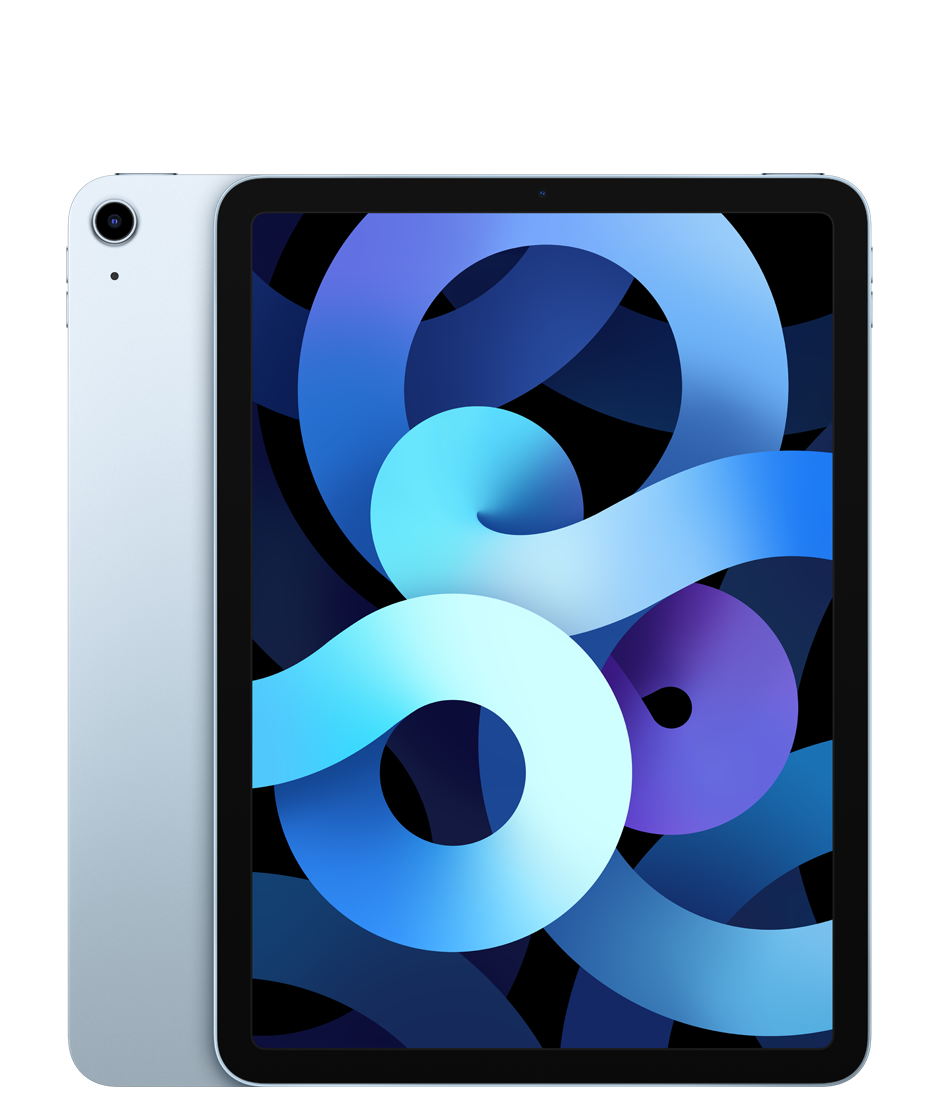 As of Nov. 2020, it’s harder to recommend the iPad Pro. Compared to other models (excluding the new iPad Air) these still offer top tier performance, more RAM, and higher memory capacities. If you want a Pro level model, I would honestly wait until new editions of these models are released.

If you have any questions or feedback I would absolutely love to hear from you. You can find me on social media via the links below, or feel free to contact me here.

You can also get a free collection of awesome calligraphy resources when you sign up for my newsletter. This collection includes a discount code that you can use for products in my shop, procreate brushes, lettering guides, and more - just enter your email below to get the Blackletter Treasure Trove now! 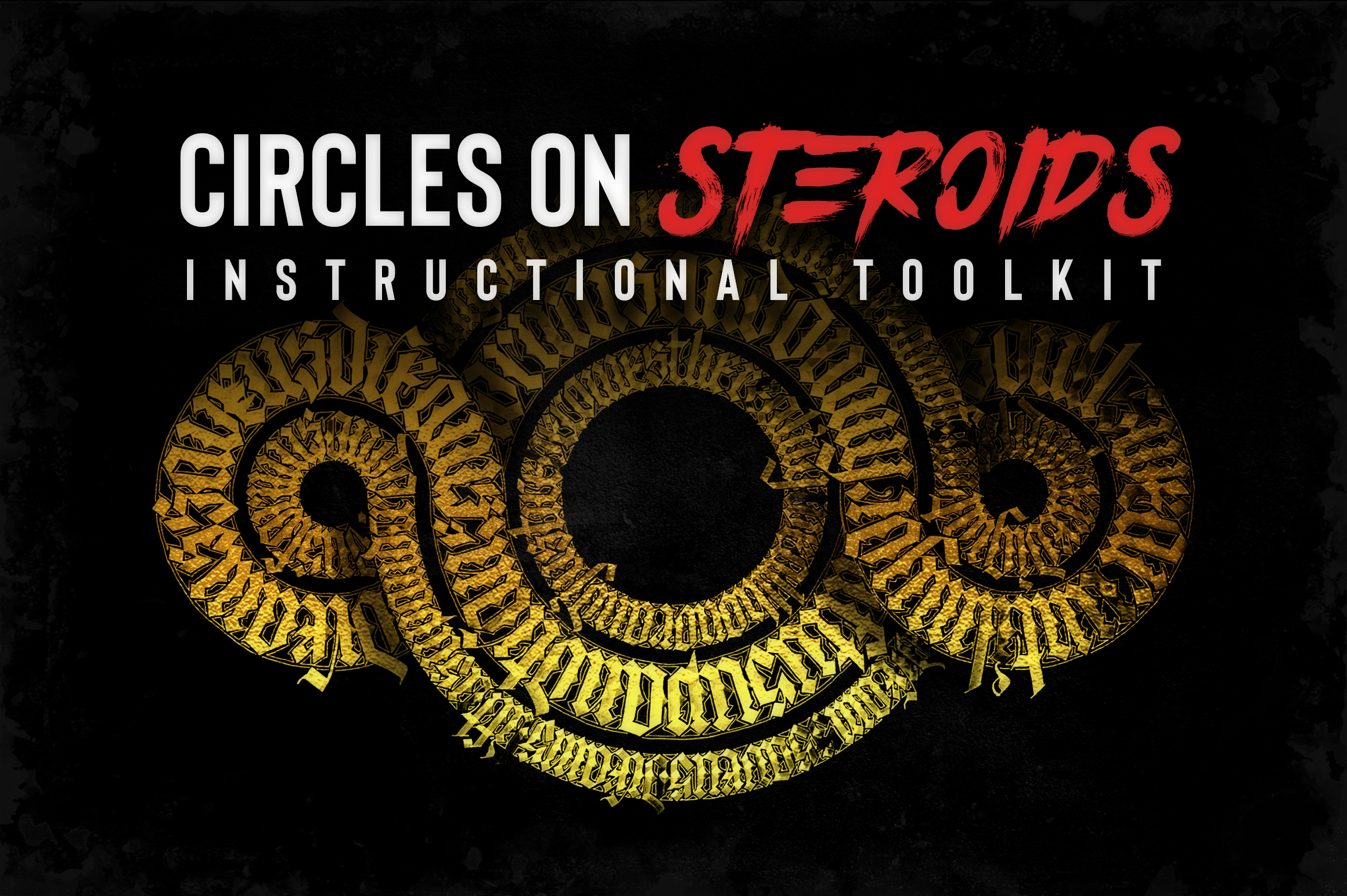 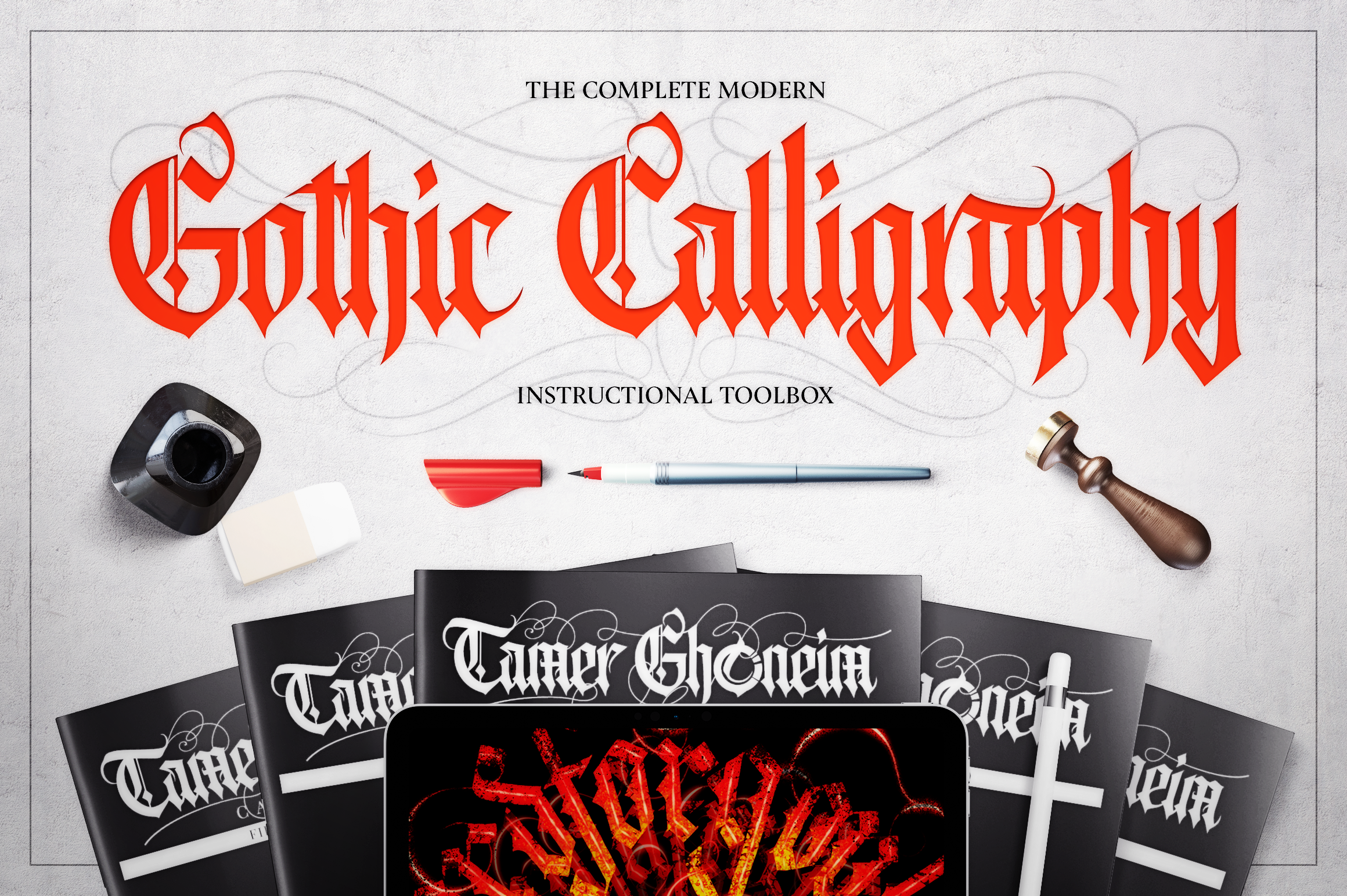 Get a bundle of FREE blackletter resources when you sign up for my newsletter!